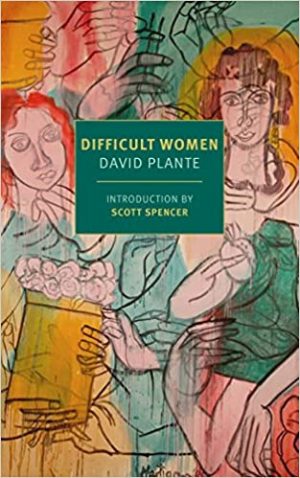 David Plante’s dazzling portraits of three influential women in the literary world, now back in print for the first time in decades.

Difficult Women presents portraits of three extraordinary, complicated, and, yes, difficult women, while also raising intriguing and, in their own way, difficult questions about the character and motivations of the keenly and often cruelly observant portraitist himself. The book begins with David Plante’s portrait of Jean Rhys in her old age, when the publication of The Wide Sargasso Sea, after years of silence that had made Rhys’s great novels of the 1920s and ’30s as good as unknown, had at last gained genuine recognition for her. Rhys, however, can hardly be said to be enjoying her new fame. A terminal alcoholic, she curses and staggers and rants like King Lear on the heath in the hotel room that she has made her home, while Plante looks impassively on. Sonia Orwell is his second subject, a suave exploiter and hapless victim of her beauty and social prowess, while the unflappable, brilliant, and impossibly opinionated Germaine Greer sails through the final pages, ever ready to set the world, and any erring companion, right.