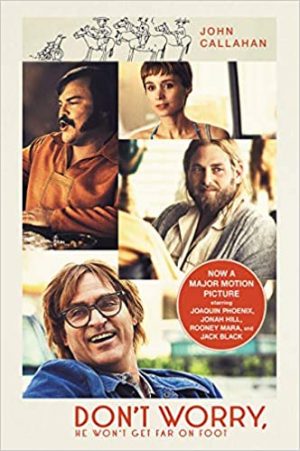 Don’t worry, he won’t get far on foot

“When people laugh like hell and then say, ‘That’s not funny,’ you can be pretty sure they’re talking about John Callahan.”— P.J. O’Rourke

In 1972, at the age of 21, John Callahan was involved in a car crash that severed his spine and made him a quadriplegic. A heavy drinker since the age of 12 (alcohol had played a role in his crash), the accident could have been the beginning of a downward spiral. Instead, it sparked a personal transformation. After extensive physical therapy, he was eventually able to grasp a pen in his right hand and make rudimentary drawings. By 1978, Callahan had sworn off drinking for good, and begun to draw cartoons.

Over the next three decades, until his death in 2010, Callahan would become one of the nation’s most beloved—and at times polarizing—cartoonists. His work, which shows off a wacky and sometimes warped sense of humor, pokes fun at social conventions and pushes boundaries. One cartoon features Christ at the cross with a thought bubble reading “T.G.I.F.” In another, three sheriffs on horseback approach an empty wheelchair in the desert. “Don’t worry,” one sheriff says to another, “He won’t get far on foot.”

Don’t Worry, He Won’t Get Far on Foot recounts Callahan’s life story, from the harrowing to the hilarious. Featuring more than 60 of Callahan’s cartoons, it’s a compelling look at art, addiction, disability, and fame. A film adaptation scheduled for 2018, starring Joaquin Phoenix as John Callahan, will bring fresh attention to this underappreciated classic.